The intelligentsia and public figures of Azerbaijan are also involved in propaganda against ethnic Armenians. They are actively spreading racial hatred and discrimination. Such propaganda is prohibited by international law, including the “International Convention on the Elimination of All Forms of Racial Discrimination.”

Below, we show examples of inciting hatred and hostile propaganda from Azerbaijani public figures. They are characterizing Armenians as “chauvinists,” “nazis,” “liars,” “scoundrels,” and “rats.” These public figures even say that there is a disease typical for Armenians, the so-called “Armenian disease.” They also justify violence against Armenians and make public calls for war.

06.10.2020 Azvision.az – gynecologist Galib Asadov: “The cure for the “Armenian disease” is the Azerbaijani army.”

“…The reasons for the misfortune of Armenians are extreme nationalism, hostility towards other nations, especially towards the Turks, chauvinism, expressed stronger than nazism. Imagine that the Republic of Armenia has territorial claims to 3 out of 4 neighbors. There is no other nation with such sick thinking.

Armenians are convinced that they are the superior tribe. They think that they have the most ancient culture. This, in the end, led to the fact that Armenians think that other nations are their enemies. And this, in turn, led to the emergence of an unusual feature called “Armenianness.”

Today, the whole world is facing Armenian terrorism, which has been prepared for decades, both physically and mentally. Despite the countless acts of terror committed by terrorist organisations backed by Armenia, neither big countries, including the US, nor other international organisations, have spoken out on this issue. However, they should know that terrorist acts, which are a threat to international security, are the result of the “Armenian disease” that has taken root in Armenia and the Armenian people.”

“The Armenian people are sick. Armenian society has been suffering from this disease for many years. They always declare that everything in the world is Armenian. “Armenian disease” is the name of this disease.

19.10.2020, Trend.az – People’s Artist Fikret Verdiyev: “… Karabakh will be cleansed of the satanic scum of Armenian fascism”

“These fascists have no honor and they are justly being destroyed. And everyone who is alive should run from our native land…”

“I do not even want to call these “neighbors” a nation. The names of these enemies are fascists, nazis, aggressors, occupiers… Today, when our hearts and souls are torn due to the results of ongoing events, our faith and strength lead us to victory over these similar animal beings…”

“Armenian liars and their collaborators are conducting a useless social media campaign  to undermine our unity. These scoundrels, who are now hiding in their burrows like rats, should know that nothing can destroy the unity of Azerbaijan. Today we, citizens of Azerbaijan, are moving towards victory over Armenian fascism.”

“The aggressors are shooting and killing our civilians… The enemy is destroying the homes of our civilians. They show their fascist faces one more time. May God destroy your home. You do not know what a motherland and home are. You have great aspirations, but you do not understand the precious feeling of love for a motherland. You are insects, born to kill and destroy.” 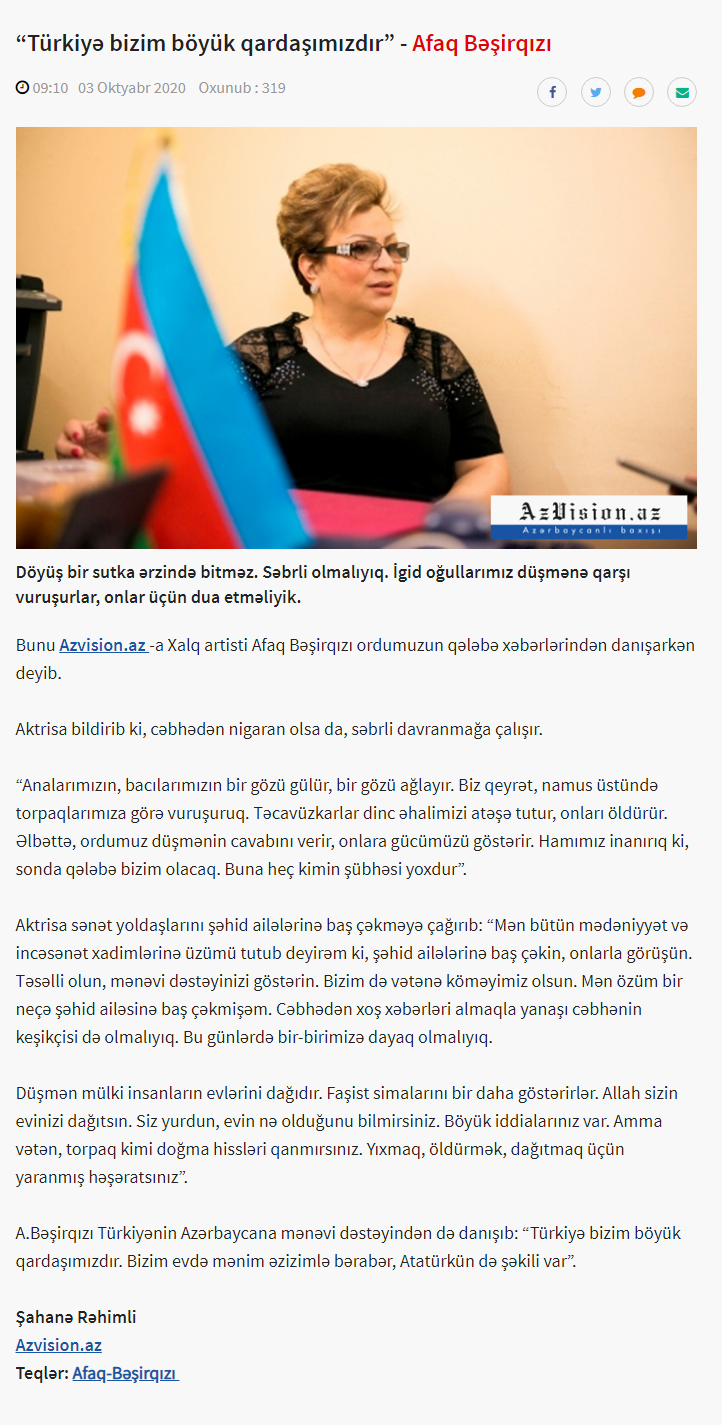 03.01.2020, Azertag.az – cardiologist Zoya Dmitrenko: “It is very good that the president of Azerbaijan instructed our soldiers to clear the Azerbaijani lands from the enemy”

“… Of course, as a doctor, I should not support and welcome hostilities, but in this case, as a person living in Azerbaijan, I think that the Nagorno-Karabakh conflict imposed on us by our ungrateful neighbors should have been resolved by all means.” 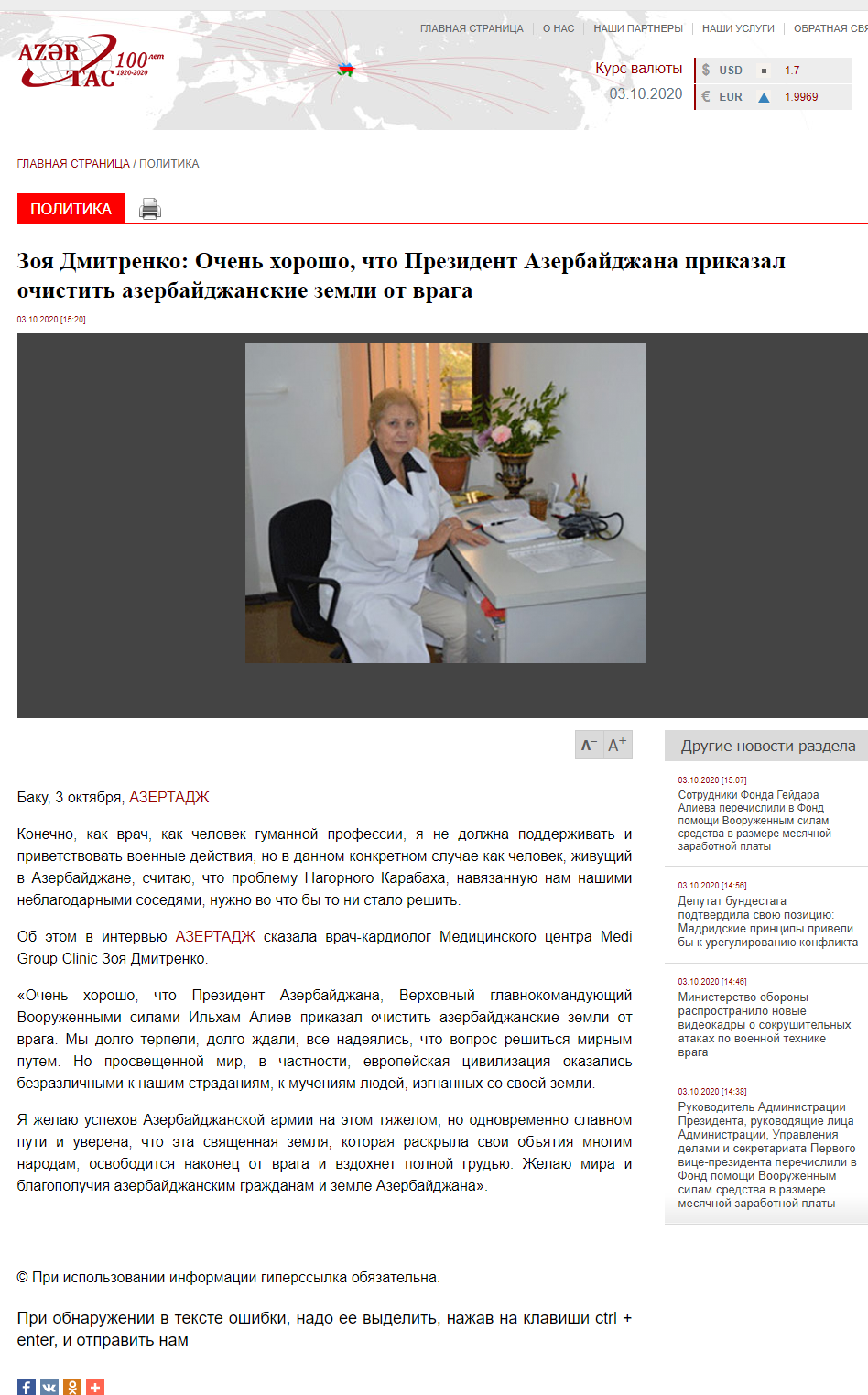 19.10.2020, Trend.az – Honored artist Rafik Seidzade: “The CSTO should consider whether they need an insidious ally like Armenia”

“History has shown that one of the main factors in the collapse of such a powerful state as the USSR was the bloody Armenian separatism in Azerbaijan’s historic lands. For 30 years, we wanted to solve the problem peacefully, but all that time, Armenian fascists continued to commit atrocities in our land. Now it is the time for liberation.

… Armenians with their mother’s milk absorb hatred towards their neighbors, in particular Turks and Azerbaijanis. This way, they form their national-fascist ideology, which they pass on to their children.”